As part of the company’ s commitment to corporate social responsibility, OMRON joins worldwide efforts to halt the accelerated loss of global biodiversity that occurred after the mid-20th century. Toward this end, OMRON seeks to preserve biodiversity from the dual perspectives of business operations and community contributions. To ensure the validity and effectiveness of its efforts, OMRON will focus its attention on the following three points: 1) Collaboration with concerned stakeholders; 2) Emphasis on objective assessment of effects and continued improvements; and 3) Reduction of risks and maximization of benefits shared across society.

OMRON will work to help protect biodiversity by emphasizing the course of action mentioned above.

OMRON formulated a biodiversity policy in collaboration with Conservation International* (CI), an international NGO. During the course of policy formulation, OMRON was advised by CI to maintain perspectives of validity, efficacy, and efficiency (degree of contribution) when planning a policy or activities. These points are also essential to consider in addition to the more fundamental discussion of why the OMRON Group needs to address biodiversity issues.

After this process, OMRON reached a conclusion: "A company exists in a human society, which in turn exists in a natural society." Based on its belief that a business should create value for society through its key practices, OMRON considers conserving biodiversity as an important plank in its commitment to sustainability (not just as a part of environmental preservation) as it works to realize a better society.

OMRON’s approach to preserving biodiversity is to make use of its Group sites including offices and factories and promote activities that reflect the characteristics and issues of each region.

Protection and breeding of the striped bitterling, an endangered species, in a biotope

OMRON's Yasu Office uses approximately 1,000m3 of groundwater per day to manufacture semiconductors. This is equivalent to the amount of water used by about 1,200 general households a day.

Also, the Yasu Office is located in Shiga prefecture which contains Lake Biwa, known as the Mother Lake.

For this reason, the Yasu Office is particularly committed to preserving the environment, making sure to only release factory wastewater after it has undergone a sufficient level of purification. Against this backdrop, the Yasu Office in 2011 created a biotope*1 named the pond of bitterlings, using the factory wastewater within its premises, and Yasu Maru pond in 2018. To make effective use of wastewater discharged from the factory without endangering living creatures in the region, the Yasu Office employees are working to protect and breed the striped bitterling*2 with advice from experts at the Lake Biwa Museum. The striped bitterling is a class IA endangered species designated by the Ministry of the Environment.

Since 2013, the Yasu Office holds nature observation tours every summer for neighboring residents and other guests. In 2018, the Office invited about 250 children from neighboring after-school day-care centers and elementary schools.

In addition, from fiscal 2018 OMRON has been participating in the Lake Biwa Biodiversity Network. Eight companies based in Shiga Prefecture are working together in using dragonflies as common indicator organisms, given their close relationship to water. Their actions are threefold — surveying, conservation, and sending of information regarding the hundred species of dragonfly said to be living within the prefecture. January 2019 saw an approximately one-month long special exhibition jointly sponsored with the Lake Biwa Museum, providing an opportunity to tell a large number of people about our initiatives open to that point, and to draw attention to the importance of nature.

As a result of these activities, this received an award in the Biodiversity Action Award Japan 2018 conservation category, and was certified as a The Japan Committee for United Nations Decade on Biodiversity (12th).

This also earned the top three-star rating in Shiga Prefecture’s Shiga Biodiversity Action Certification Program, which has been running since 2018. Under this program, the governor certifies activities related to the preservation of biodiversity carried out by companies and organizations with head offices and branches within Shiga Prefecture.

OMRON's Yasu Office will continue to promote the protection and recovery of endangered species through its biodiversity initiatives, and to expand the range of environmental conservation through providing environmental education to children. 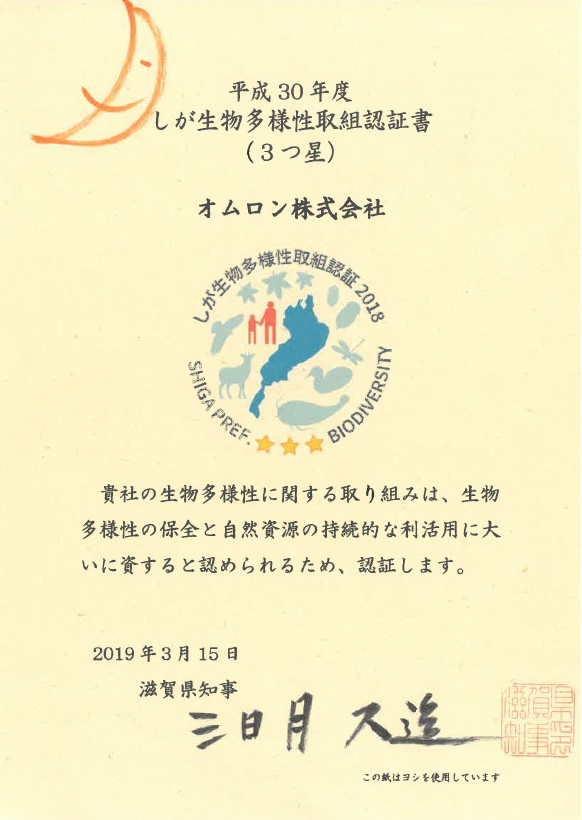