A variety of initiatives to promote sustainable procurement

Working Together with Suppliers

By implementing the PDCA improvement management cycle together with suppliers, OMRON is committed to enhancing sustainability performance in its supply chain.
OMRON also asks critical suppliers to join OMRON in efforts to conform to the RBA Code of Conduct. (RBA: Responsible Business Alliance)

The OMRON Group annually holds a Global Partner Conference targeting representatives of its main global suppliers, to brief suppliers on OMRON’s purchasing policies. The conference is intended to share and align OMRON’s management policies, business strategies, purchasing policies, and sustainable procurement policies, which include environmental policies, with suppliers. The conference also provides an opportunity to exchange views with suppliers, with the possibility of reflecting their views in future OMRON purchasing measures to enhance their effectiveness.

Representatives of 110 suppliers participated in the Global Partner Conference. All of the participants who answered the feedback questionnaire commented that OMRON's policies and vision were made clear and they shared the view.
During the briefing, OMRON reported that sustainable procurement is advancing favorably. We asked attendees to continue working with OMRON toward a sustainable society throughout the supply chain. 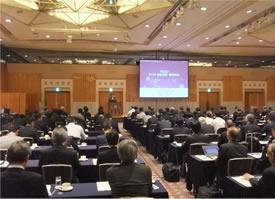 In addition to requesting that suppliers conform to OMRON Group Sustainable Procurement Guidelines, the OMRON Group also conducts questionnaire surveys, distributing self-assessment sheets to all suppliers and asking them to check their implementation and compliance regarding the guidelines on their own initiative at least once every three years, so as to improve their practices.

During fiscal 2018, self-surveys were conducted at 462 suppliers in China and 144 in the EU/Americas. In China, we conducted on-site audits for compliance at 23 companies in line with our fiscal year plan. During fiscal 2019, we plan to conduct audits in Japan, China, and Asia/Pacific.

Assessment based on Third-party Standards

In accordance with the OMRON Principles, the OMRON Group strives to help create a sustainable society throughout the world by taking dual approaches. One is to supply products and services that contribute positively to the global environment, and the other is to maximize effective use of all management resources. Moreover, OMRON promotes "Green Procurement" of materials, we are proactively adopting materials that do not contain hazardous chemical substances and contributes to reducing environmental impact.

In green procurement, OMRON specified ecology (reduction of environmental impact) and compliance (observance of laws, regulations, and social norms) as key programs that should be promoted across its supply chain. As such, OMRON certifies green suppliers from dual perspectives—establishment of an EMS for environmental management and a CMS for management of chemical substances contained in products. 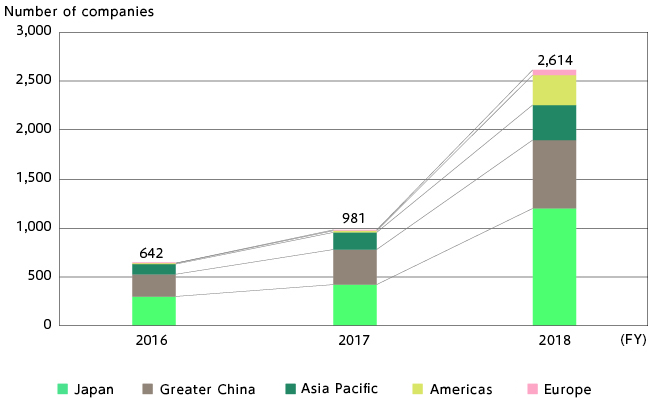 For suppliers deemed to have sustainability risks as a result of our surveys/audits, we requested drafts of improvement plans and implementation of corrective actions.

Today there is a concern that profits from the trading of minerals mined in the Democratic Republic of Congo and nine neighboring nations have been used to finance armed rebel groups, allowing them to continue fighting and encouraging ongoing inhumane acts and environmental destruction. For this reason, such minerals are called “conflict minerals” and include tantalum, tin, tungsten, and gold. To deal with this problem, Section 1502 of U.S. Dodd-Frank Wall Street Reform and Consumer Protection Act (Dodd-Frank Act) was signed into law in 2010.The act does not apply to the OMRON Group. However, from the above-mentioned concerns, OMRON set forth on the conflict mineral investigation since FY 2013 without using conflict minerals that are the source of the armed forces.
Through its surveys conducted up to fiscal 2017, there has been no discovery of the use of conflict minerals for which any association with armed rebel groups is suspected. Should the use of any conflict minerals in OMRON Group products be discovered, OMRON will take corrective action as quickly as possible.

Four conflict minerals (tantalum, tin, tungsten, and gold) mined in the Democratic Republic of Congo and adjoining countries have become a source of income for armed rebel groups, which supports their violations of human rights and environmental destruction. With this in mind, the OMRON Group will declare non-use of such conflict minerals. The OMRON Group will also procure these minerals from conflict-free smelters, such as RMI, Responsible Material Initiative. Should the use of any conflict minerals in OMRON Group products be discovered, OMRON will take corrective action as quickly as possible.

Since fiscal 2013, the issue of conflict minerals has been specified as one of main themes to be deliberated upon and addressed by the Corporate Ethics and Risk Management Committee, which is in charge of devising and promoting counteraction against the OMRON Group’s significant risks. As such, the Committee reports the status of conflict mineral use to the Board of Directors and Executive Council every half year.In fiscal 2013, ORMON set up the Anti-Conflict Minerals Project to formulate an annual action plan based on the review of results of the previous year’s activities, managing the progress of plan implementations for each supplier and each parts/material category on a monthly basis.

Survey of conflict mineral use

In fiscal 2018, OMRON examined materials purchased by the OMRON Group over the past two years.

Through monthly management of survey responses, OMRON checked with suppliers who hadn’t responded yet, asking for their progress in order to help raise the response rate. The responses were examined thoroughly, and in any case of missing or inadequate answers, OMRON communicated with such suppliers to improve the reliability of responses.

To date, there has been no discovery of usage of conflict minerals for which any association with armed rebel groups is suspected. Should the use of any conflict minerals in OMRON Group products be discovered, OMRON will take corrective action as quickly as possible.

Briefing surveys on conflict minerals use to suppliers

In April 2011, OMRON joined the Responsible Minerals Trade Working Group organized by the Japan Electronics and Information Technology Industries Association (JEITA), actively collecting information and promoting partnerships with industry organizations. Since fiscal 2015, OMRON participates in the planning and management of conflict mineral investigation conference meeting hosted by the Working Group to promote dissemination of conflict minerals efforts across supply chains of the industry as a whole. 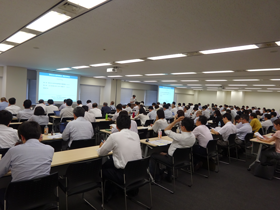 Cobalt is used in lithium-ion batteries that are indispensable for electronic vehicles, mobile phones among other products. The Democratic Republic of Congo is the largest cobalt producer in the world, and there is a concern pointed out about manual mining in the country with poor working conditions and child labor.
OMRON has a basic CSR policy in its CSR Procurement Guidelines that bans any forms of forced and child labor, and promotes cobalt procurement in a manner not to drive environment destruction and human rights violation.
During fiscal 2018, we used the RMI (Responsible Minerals Initiative) Cobalt Reporting Template as a trial survey for lithium ion secondary batteries, which have come under scrutiny around the world.

Developing fine-quality products to contribute to society through business is one of the most important social responsibilities of a manufacturer. At the OMRON Group, we believe that it is equally important to provide a stable supply of products, even in the case of a contingency. Based on the awareness that a disaster can happen at any moment, OMRON has been promoting procurement BCP* since fiscal 2011. Specifically, OMRON checks with customers regarding products that need to be supplied preferentially in the case of an emergency, taking BCP measures for the parts/materials that make up such high-priority products. Further, we are engaged in risk-response initiatives that include area-based risks, assuming major disasters such as an earthquake under the Nankai Trough.

OMRON manages potential procurement risks for parts and materials by classifying them into three ranks. Efforts are now focused on minimizing procurement risks by taking measures such as keeping certain parts/materials in stock. The goal is to build a system to resume procurement of all parts within a month in the event of a disaster. In fiscal 2017, OMRON designed and introduced a central inventory control system to manage the stock of highest-risk parts in a unified manner at OMRON. Starting fiscal 2018, OMRON has been working on early-stage, stable procurement by forecasting demand-supply gap to select parts and materials and to ensure inventory.

Presently, efforts are made to instill these rules across the OMRON Group by sharing information with purchasing officers of all Group companies during their meetings or individually giving explanations to factory purchasing staff. The auditing department also conducts business audits periodically to maintain and enhance compliance with the OMRON Group Rules.

In order to realize sustainable procurement, OMRON provides its purchasing staff with in-house workshops on human rights, labor, and other global social issues in supply chain.

In fiscal 2019, OMRON had workshops for staff members at headquarters’ purchasing department.

The workshops were given so that everyone at the department could have the same awareness of the importance of sustainable procurement as well as various risks in supply chain, consider how OMRON should respond to sustainable procurement requirements from the society and customers, and put the ideas into practice. By using a video conference system, regional purchasing officers in China joined the workshops as well. 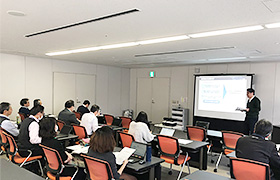 The OMRON Group has established a hotline to accept reports from suppliers on compliance-related problems involving OMRON purchasing departments, as well as their opinions, in order to ensure the strict maintenance of compliance in-house. The hotline is set up at an external law firm, so the identities of the hotline contacts will never be disclosed or leaked to third parties.